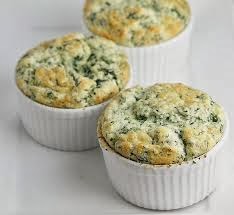 Wash and cook the spinach and leave to drain in a colander for about an hour – this ensures all excess fluid is gone.

Preheat oven to 200°C. Brush the base and sides of six 185ml (3/4-cup) capacity ovenproof ramekins with melted butter to grease. Divide the breadcrumbs among the ramekins and rotate to coat the inside. Shake out excess.

Melt the butter in a medium saucepan..Gently add the flour, using a wooden spoon to stir until the mixture is smooth and has no lumps. Reduce the heat to low and cook, stirring all the time until bubbles appear in the mixture. Remove from heat. Gradually add the milk, stirring constantly until the mixture is smooth. Return the pan to a medium heat. Bring the mixture to the boil and cook, stirring constantly until the mixture thickens. This can take up to 5 minutes. Add the spinach.
Remove the pan from heat and stir in the Parmesan. Transfer the mixture to a large heatproof bowl. Stir in the egg yolks. Season
Use an electric beater to whisk the egg whites in a clean, dry bowl until firm peaks form. Use a large metal spoon to fold half the egg white into the spinach mixture until combined. Gently fold in the remaining egg white until the mixture is just combined. Spoon the mixture evenly among the prepared ramekins.
Place the ramekins on a large baking tray. Bake in oven for 15 minutes or until the souffles are puffed and golden. Serve immediately.
Categories: EggsEntreesFrench

is naltrexone dangerous for women https://naltrexone.mlsmalta.com/

can dapoxetine cause prostate cancer https://dapoxetine.bee-rich.com/

how does cefixime kill bacteria https://cefixime.webbfenix.com/

alternatives to tamoxifen for premenopausal https://tamoxifen.mrdgeography.com/

is hydroxychloroquine available over the counter · December 5, 2020 at 5:16 pm

how to take liquid cialis https://wisig.org/

viagra no prior prescription http://viaaagra.com/

Thanks for your ideas. One thing I have noticed is that banks and financial institutions know the spending habits of consumers and understand that most people max out their credit cards around the holidays. They wisely take advantage of this fact and start flooding your inbox and snail-mail box with hundreds of 0 APR credit card offers soon after the holiday season ends. Knowing that if you are like 98% of the American public, you’ll jump at the chance to consolidate credit card debt and transfer balances to 0 APR credit cards. cccccei https://headachemedi.com – buy Headache pain medications

Useful information. Lucky me I discovered your web site by accident, and I’m stunned why this coincidence didn’t happened earlier! I bookmarked it. https://stomachulcersmedi.com drugs used to treat stomach ulcers